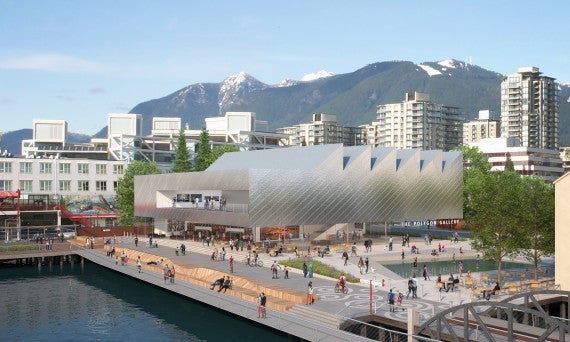 Photo courtesy of Polygon Gallery
It is not just condo towers and trendy restaurants that are shaping Lower Lonsdale, it is also the Polygon Gallery and the construction of the new North Vancouver Museum that are transforming it into the cultural district of the North Shore.
The Polygon Gallery is already obvious to the naked eye; nestled between the Quay and the Shipyards, the new home for the Presentation House Gallery (renamed Polygon Gallery for it’s main donor), is Canada’s largest non-profit photography gallery. The new space is the result of three decades of work and hundreds of exhibitions from the Presentation House Gallery, which is currently located in an old school house on the corner of Chesterfield and 3rd street. It will also be the first public art gallery to be built in Vancouver in the 21st century. (Yes, you read that correctly and we are 17 years into the century.)
Designed by Patkau Architects (who are also responsible for the Audain Art Museum in Whistler), the Polygon Gallery, as Wallpaper Magazine describes it, “pays homage to the roots of the area with a saw tooth motif, perforated metal cladding and industrial style ceilings.” But it also has sleek urban features, such a south facing retractable glass wall that opens onto a balcony with breathtaking views of Vancouver, while the ground floor of transparent glass connects the surrounding public space. But perhaps the most interesting characteristic of the new gallery is what will take place in its 19,000 square feet, which will include expanded space for galleries, preparation work area, and event and lecture space.
With the new space, the Gallery is committed to greatly increase the range of cultural opportunities. First of all it will more than double the current exhibition area, but because it is a purpose-built gallery, it will be able to accommodate newer types of contemporary art, such as large format work.  Exciting, isn’t it? It feels like the art will be coming to the residents of the North Shore, instead of the other way around. The Polygon Gallery is expected to be open to the public this coming September.
The North Vancouver Museum is the other cultural institution that will enrich the area. Last December, the City of North Vancouver Council voted to approve a new 16,000 square feet museum in Promenade at the Quay, the new retail/residential complex currently being built in Lonsdale and Esplanade.  The purpose of this new museum is to create a place for connection and discovery by creating a community gathering spot in the heart of the North Shore. Its exhibits and programs seek to engage people of all ages and aims to convey the stories of one generation to be shared with the next. Though it will be comprised of core exhibits, which will revolve around three major themes: Connections by Water, Building Communities and On Nature’s edge, it will also have a temporary exhibit gallery.
One very interesting aspect is that the new museum plans to integrate indigenous stories into its exhibits. Sheryl Rivers, a Squamish Nation member and commissioner of the North Vancouver Museum and Archives told the Vancouver Sun that the exhibit will include aboriginal stories woven through out the museum rather than keeping them in separate areas and considers it a big step.
Though it is still in a planning stage, the museum is set to open to the public in 2019. The City of North Vancouver is providing the city-owned space and committed $2.555 million, while the Government of Canada will invest $3 million toward construction and other costs.
Who could have imagined just a few years ago that Lower Lonsdale would undergo such a transformation and would become the cultural heart of the North Shore?